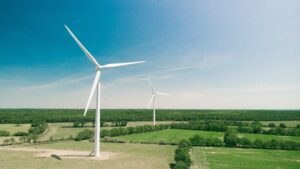 The renewable energy industry has been one of the up-and-coming industries for most of this century. Solar and wind grew rapidly to start the century as subsidies grew around the world, but that didn’t lead to a lot of financial success for investors.

In 2021 the industry is starting to stand on its own. Manufacturers have built competitive advantages, companies are differentiating themselves with technology, and financing has matured as well. Given all of the changes in energy over the last 20 years, here are the four biggest reasons I’m bullish on renewable energy stocks.

This is where energy’s growth is

The energy industry isn’t known for being high-growth in general, but renewable energy has been booming for more than a decade. The chart below shows the change in production of wind, solar, and all renewable energy over the past decade. You can see that solar energy is growing fastest, albeit from a small base — but the entire renewable energy sector is growing quickly. 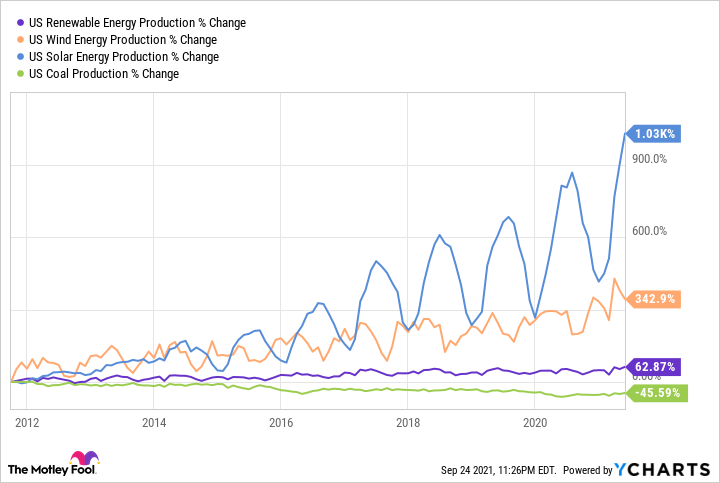 In fact, the U.S. now produces more electricity from renewable energy than coal, which was once the leading source of electricity nationwide.

If you’re looking for growth in the energy industry, renewable energy is the first place to look.

The major energy advances coming from technology should disproportionately help renewable energy. Solar energy has been a clear example of that, with the cost of solar panels down over 99% since 1977. The costs of wind, solar, fuel cells, batteries, and other technologies continue to come down at the same time efficiency goes up, which will provide another tailwind for renewable energy adoption.

Fuel cell technology is improving rapidly, which could enable hydrogen fuel that’s both 100% clean (produced from water and renewable electricity) and less expensive than fossil fuels. Bloom Energy (NYSE:BE is one of the leaders in green hydrogen, and as its costs come down management expects clean hydrogen fuel will beat gasoline on a cost basis.

No matter where you look, renewable energy technology is improving and making it more competitive with fossil fuels. Long-term, that will be a big advantage for the industry.